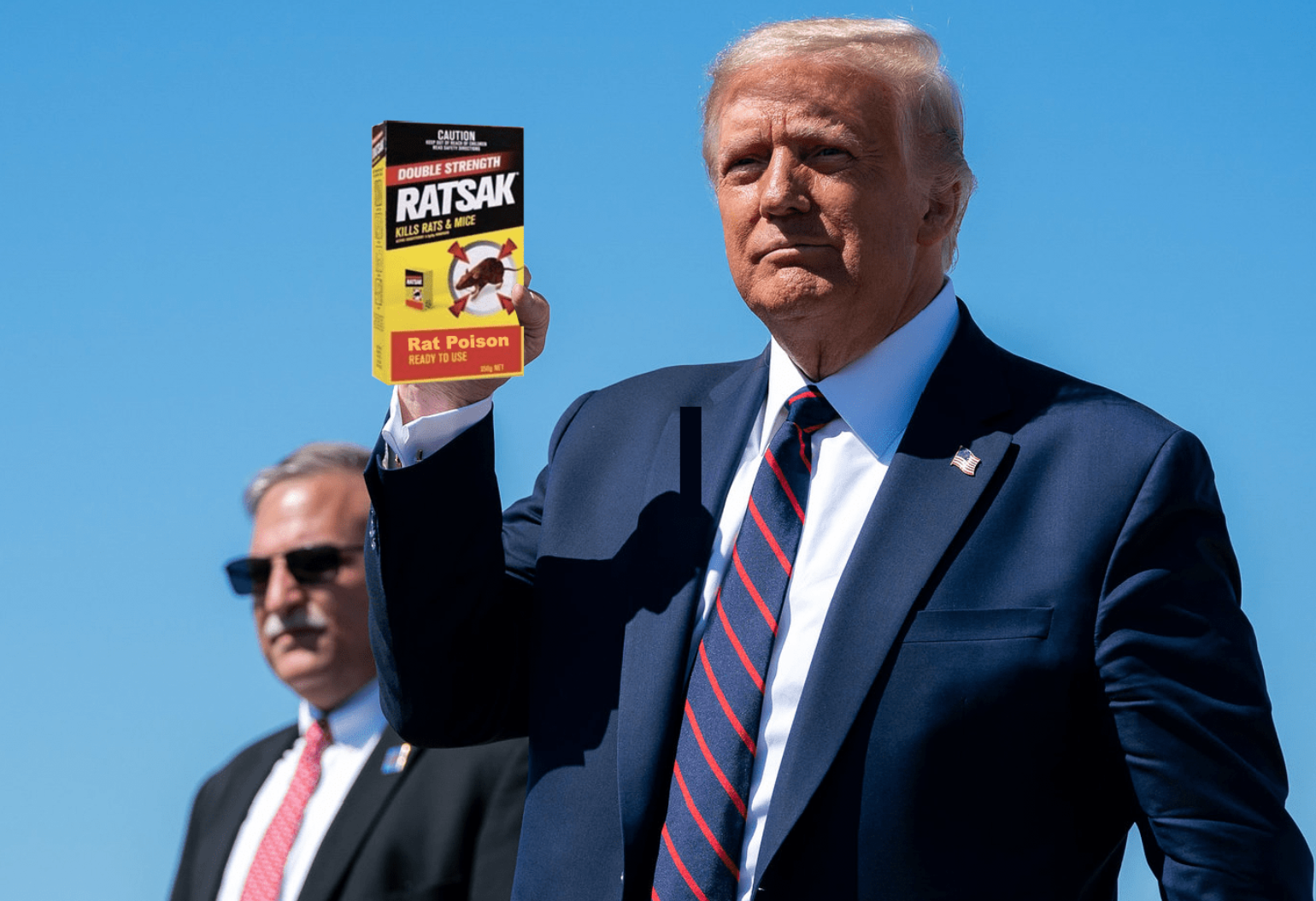 Muttering to himself “it had better fucking work this time,” Donald Trump held up a box of rat poison today and told supporters that it was yet another cure for COVID-19. Privately, Trump admitted that the move was just another hasty, last ditch effort to lose the election.

“You’re gonna want to eat the whole box. Some people say two boxes to make sure you really kill the virus,” Trump told the cheering crowd. “You’ll feel worse at first, but shortly thereafter you won’t feel anything at all.”

After leaving the stage the president told reporters from CNN and MSNBC what he was really doing, knowing that his supporters wouldn’t believe the news outlets’ footage of him anyway.

“Man it feels really good to finally say this out loud: I’m absolutely sick and tired of being president. I don’t want to do it anymore. What in the fuck is wrong with these people?” Trump stated while motioning toward the crowd. “I’ve been trying to hand this thing to Biden for months and it still looks like I might win. What the fuck do I have to say or do to throw this election?”

Indeed, Trump’s frustration is warranted as his supporters don’t seem to care that people are dying from COVID-19, that he wouldn’t set an example by wearing a mask for months on end, or that he had recommended that people take deadly drugs.

“These morons entertained the idea of injecting or drinking disinfectants. I told them to try the unproven drug hydroxychloroquine and then I upped the ante by suggesting the use of oleandrin – a poisonous extract that kills,” a visibly saddened Trump stated. “At this point my life has become a sad, sad joke. What did I do to deserve this? Maybe I’m in hell.”

As of Sunday night the president said he had too much pride to just quit the race. Instead, he was strongly considering actually shooting someone in the middle of 5th Avenue to see if that would make him lose votes.

Mon Aug 31 , 2020
During an interview on Fox News, president Trump told Laura Ingraham that the police officer who shot Jacob Blake seven times in the back had “choked” much like “missing a three foot putt.” But the strange answer didn’t stop there. In the edited out portion of the tape, Trump continued his comparison for another fourteen minutes. “Everyone knows that seven shots is over par for any hole. So I don’t know what that officer was doing. That’s sloppy play.” Trump stated. “But when you think about it, seven shots over par on… say the back nine at Mar-a-Lago is actually pretty good. So it really just depends on whatever it is we’re talking about here.” At this point Ingraham had unsuccessfully tried to stop Trump’s insensitive, incoherent rambling twice, but he continued. “You know, just the other day I was playing golf with a few Black guys and I shot a hole in one. I shot a hole in one on a par five. Can you believe it?” Trump asked a stunned Ingraham. “And honestly that’s the closest I’ve come to what that officer did because honestly nobody has done more for the Black community than me. Maybe Abraham Lincoln. Maybe Lincoln. I wonder if he golfed.” Photo credit Gage Skidmore