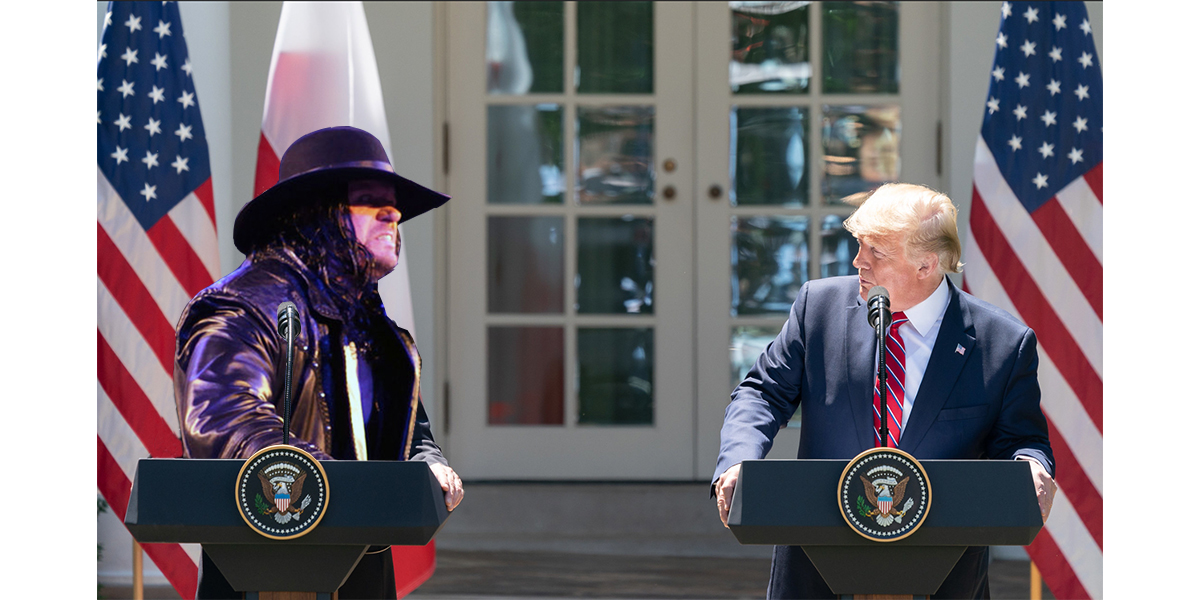 Just three days after retweeting a call for Dr. Anthony Fauci’s removal, Donald Trump made the firing official today by axing the Director of the National Institute of Allergy and Infectious Diseases. The president’s decision was announced Thursday afternoon immediately preceding a press conference which was held to introduce Fauci’s replacement: world-famous professional wrestler The Undertaker.

“For more than three decades The Undertaker has ruled over World Wresting Entertainment, or the WWE as I like to call it,” Trump stated. “It used to be the WWF, but the animal rights nuts ruined that. So now it’s WWE, but whatever.”

The president went on to list The Undertaker’s qualifications.

“We’re dealing with death folks, but look at this guy! He’s like a terrifying phantom who brings doom and misfortune to anyone who dares cross him. He’s the master of death! It is because of these mystical abilities and a natural born talent for leadership that I have selected The Undertaker to be the next Director of the National Institute of Allegra and Infectious Diseases,” Trump stated. “He’s going to deliver a tombstone piledriver to the Chinese virus. And who better to fight off this deadly disease than The Deadman himself?”

The shocking move to replace Fauci with The Undertaker comes just days after Trump announced he’d added the CEO of WWE Vince McMahon and UFC president Dana White to his economic task force.

Fri Apr 17 , 2020
An in-depth study by the University of California-Berkeley revealed today that the number of Americans who drown in a swimming pool last year far surpassed the amount of people who have ever received any helpful advice from Dr. Phil. “In the United States alone, 3,536 people drown in a pool last year,” head researcher Brian Fardango stated. “While any number is too high when talking about death, this amount of pool-related deaths is still far higher than the number of people who have ever received useful advice from ‘Dr. Phil’ who is unlicensed to practice any form of medicine.” “Additionally, we estimate that of the 3,536 people who drown in a swimming pool last year, at least half of them met their demise by directly following advice from Dr. Phil himself,” Fardango stated. Researchers at Berkeley also noted that those who did claim to have benefit from Dr. Phil’s advice already had brain activity similar to those who had been found floating face-down in a swimming pool.