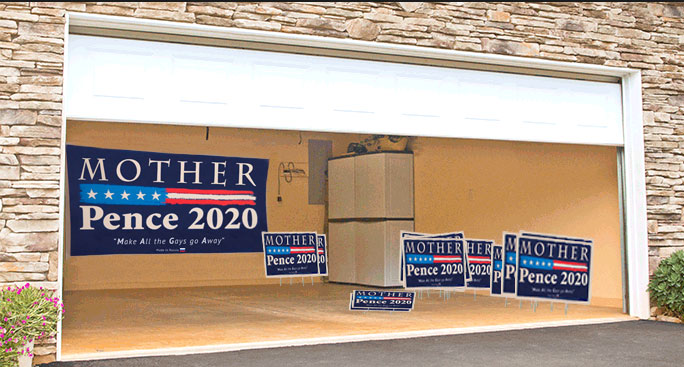 After following Mike Pence home Sunday night to ask questions about the impeachment hearings, field reporters from FOX News saw something much, much more interesting in the Vice President’s garage: a ‘Mother-Pence 2020’ banner along with several campaign yard signs.

Notably, the campaign materials in question have retained the ‘MAGA’ slogan, but repurposed the acronym to stand for “Make All the Gays go Away.”

Take me to the MEMES!

Trump: 'It's cute that Rick Perry thinks there's a God. If anything, I'm God!'

Mon Nov 25 , 2019
When asked by reporters today how he felt about Rick Perry calling him God’s “Chosen One,” president Trump faced cameras at the White House and stated “It’s cute. I think it’s really cute that Rick still thinks there’s a God. If anything, I am God!” The president’s statement caused immediate outrage among religious people of all political leanings, prompting Trump to later tweet out a clarification. The tweet has been deemed offensive by many, but good enough to serve as both an excuse and an apology for today’s Republicans. Advertisements