“The words on that statue are welcoming to criminals and lowlifes.” 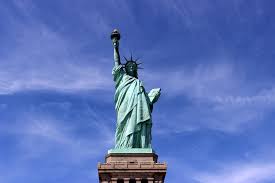 President Trump plans to declare a National Emergency on Friday so he can melt down the Statue of Liberty to use for border wall parts. The president spoke to the press earlier this morning.

“The words on that statue are welcoming to criminals and lowlifes,” Trump stated. “So we’re making a smart move by building the wall with materials we already have available to lower the costs. It’s a no-brainer folks!”

Critics of the president spoke out against the decision.

“Mr. Trump is both cheap and weak, so it makes sense that he’d use copper; which is half the strength and half the price of a real construction material like steel,” Speaker Nancy Pelosi stated.

Wed Aug 14 , 2019
In the midst of the ongoing US-China trade war, China has announced that they will no longer be shipping sex dolls to the United States. Known for their hightech, lifelike robots, China will now force Americans to interact with other people in order to recreate a realistic, robotic sexual experience. The sex doll shipping ban has already started a popular trend among US citizens of speaking like an android during foreplay and then roleplaying as robots all the way to climax. Advertisements